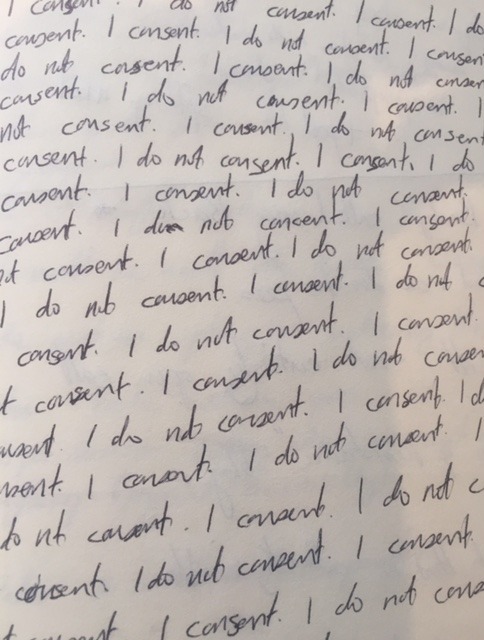 i want to talk about a woman’s silent refusal

i want to raise the volume all thick

step off of a ledge

and into a gap

i want to write the word ‘consent’ out over and over, until it becomes unfamiliar and then, only when my eyes capture a new dissonance, i can begin to redefine the word’s meanings. Or rather, i can begin to find ways to talk about why its precise and neat meaning – ‘Yes’-‘No’ – can be obscured, unheard, flattened, disregarded, rendered powerless by the force of a larger bodyweight.

i want to relate to both privilege and consent in a way that punctures through the detached veil of language; cause and effect, an intellect that prioritises the verbal… and tell the story of muggy memory. The story where a vocalised ‘Yes’ and ‘No’  is absent but which nevertheless contains the invisible presence of non-consent.

These are the stories on and of the inside, that can feel appropriated by men who can hold meetings, shape policy, ask for women who have experienced violence or discrimination to tell their stories but within frameworks whose construction is biased towards patriarchy.

i have been gently observing the currents from art scenes to Hollywood, a high street to twitter feeds and words have been leaving me. Call it damage, call it baggage, call it fallout or whatever, but sometimes i feel overwhelmed by how irrefutably subjective and bodily experiences are and how in contrast, words like ‘privilege’ and ‘consent’ are used by those who society favours and who society supports in ignoring a woman’s consent.

i see the words used as a quick shorthand that isn’t far off a disembodied generality. In particular, these terms can slip into commodity – becoming buzzwords that carry with them a reductive rendering of experiences. Experiences that become exchanged by men (often with well meaning and sincere intentions) enacting their privilege of detachment.

My consent, asked for or not, given or denied, rests in my body. It collects in pools of fleshy networks of sensation.  When my consent is ignored, on the outside there has been silence. The pools remain motionless. However, inside the depths while cells go into shock, my body protects and protests by archiving. Storing experiences away for when i can look.

And so i look…

Reflecting on these times, i don’t know why it was safer to give way or have my emotions burn out than voice a ‘no’.

i don’t know why and that makes me feel shame

i do know why and that is part of recovering

i don’t know why and actually, it isn’t on me to answer the question

Trying to language my body and my sensations can be seen as experience at its most specific. At the same time, shared stories about when a woman didn’t consent to something but felt unable to say anything or move any muscle are so, so common. There is such a need for these women to be placed at the centre of their own experiences. Too often have I encountered people – again with varying degrees of good intentions – ask about the male experience, the male driver, their motivations. In dialogue with this, is whether the woman had misunderstood (her own body!), led the man on, asked for it. In these sexist interpretations, instead of the woman articulating moments of powerless and being listened to, she becomes a reversed sexual threat capable of ensnaring the man.

So the woman is not only blamed for her powerless, patriarchy twists the narrative, rapists become the victims and violently, they are victims in command of how the survivor of an assault is perceived. The powerful take powerlessness and transform into a power of their terms and fantasies – ‘some women enjoy it’.

But….trying…trying to resist… in relation to the power of a man….

The power i do see in these accounts of women is the strength of the silent archive. As i mentioned, born out of protection but it will be uncovered where there is support.

This archive is again questioned by ….defence lawyers…

And words drown out within the context of the cyclic distrust of female experience.

How to swim through tides of disbelief with the weight that it’s all been said so much but nevertheless continues.

Again and again i turn into myself realise that in my silence, i have reenacted precisely what systematic white supremacy wants me to enact upon myself. A diminishment of voice.

A distrust in myself. An inarticulacy because my words do not carry the same weight as those of cis-men. Even if we were to say the same thing – and we rarely do – a silence would fall in the room as the man speaks. And we all get coated in the residue of different realities privileging themselves over others.

Maybe consent is the only binary I believe in.

Written out of the enduring sadness and anger that surfaces as my body voices its survival.

An attempt to stand alongside the voices of others – on all gender spectrums.

Published to support the words of my friend Julia.